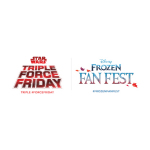 “This week marks the biggest retail event ever for The Walt Disney Company, giving fans a unique opportunity to connect more deeply with their favorite stories and characters from Star Wars and ‘Frozen 2’,” says Ken Potrock, President, Consumer Products Commercialization. “We can’t wait for fans around the world to experience the newest products, games, books and more tied to these beloved characters and their new adventures.”

Flagship Disney store locations in the U.S. hosted midnight openings allowing fans to shop a selection of commemorative Star Wars items and the new range of “Frozen 2” merchandise. Starting today, Disney store will kick off Frozen-themed in-store events in 170 locations, offer a special gift with purchase (limit one per guest, while supplies last), as well as a sweepstakes where one fan can win a trip to the “Frozen 2” or “Star Wars: The Rise of Skywalker” premiere.

Additionally, fans can visit shopDisney.com for new, immersive Triple Force Friday and Frozen Fan Fest takeovers, including video content that plays while they shop a wide assortment of merchandise for the whole family.

Star Wars fans in Anaheim and Orlando started the celebration at Downtown Disney and Disney Springs with midnight shopping at World of Disney and The LEGO® Store. LEGO Star Wars fans at Disney Springs are also invited to join a LEGO Star Wars Millennium Falcon Master Build Event taking place over the weekend. Fans in Anaheim can enjoy Frozen-themed photo opportunities while guests in Orlando will have the chance to purchase special Frozen and Star Wars-themed food and beverage offerings throughout the celebration.

Additional retail festivities across 500,000 stores globally for both Frozen Fan Fest and Triple Force Friday include:

Guests shopping Disney store at Target today and tomorrow in store or online will receive a $10 Target GiftCard when they purchase at least $40 of Frozen or Star Wars toys.** Target shoppers will find the following products, including select exclusives, for “Frozen 2” and Star Wars in store and online:

* Giveaways are available while supplies last and on a first-come, first-serve basis. Available in 25 locations that feature Disney store at Target.

Tomorrow, Oct. 5, from 12 p.m. to 4 p.m., fans at more than 1,500 Walmart stores can experience new and exclusive “Frozen 2” product, hear a special message from fan-favorite “Frozen 2” characters and receive an exclusive “Frozen 2” magnetic photo frame with a Free 4×6 photo from Walmart Photo Center (while supplies last).

While global kick-off events and retail activations for both franchises began at midnight local time, fans can expect the momentum to continue throughout the rest of the year and beyond.

Triple Force Friday celebrates the launch of a range of brand-new products inspired by a trio of upcoming original Star Wars releases, including:

On September 26, hundreds of thousands of fans around the world tuned in to the Triple Force Friday Global Reveal livestream from Pinewood Studios in London where, via live and recorded vignettes, an ensemble of Star Wars talent revealed all-new Star Wars products that are rolling out globally today, October 4.

Frozen Fan Fest is a global celebration that kicked off with hundreds of celebrity Frozen fans and social influencers from around the globe taking to social channels on Oct. 2 to reveal the all-new assortment of products for fans of all ages, including apparel, fashion accessories, toys, housewares, books and more. Fans were encouraged to share their favorite Frozen moments and follow along with #FrozenFanFest across all social platforms.

The celebration will continue at retailers worldwide as new products will continue to roll out leading up to the theatrical release and beyond.

About Disney Parks, Experiences and Products

When Walt Disney opened Disneyland in Anaheim, California, on July 17, 1955, he created a unique destination built around storytelling and immersive experiences, ushering in a new era of family entertainment. More than 60 years later, Disney has grown into one of the world’s leading providers of family travel and leisure experiences, with iconic businesses including six resort destinations with 12 theme parks and 52 resorts in the United States, Europe, and Asia with approximately 160,000 cast members; a top-rated cruise line with four ships and plans for three more to be completed in 2021, 2022, and 2023; a luxurious family beach resort in Hawai‘i; a popular vacation ownership program; and an award-winning guided family adventure business. Disney’s global consumer products operations include the world’s leading licensing business; one of the world’s largest children’s publishing brands; one of the world’s largest licensors of games across platforms; more than 300 Disney store locations around the world; and the shopDisney e-commerce platform. These experiences are created by Disney Imagineers, the creative force behind experiences found in Disney theme parks, resort hotels, cruise ships, and consumer products—including books, games, and merchandise.

STAR WARS and related properties are trademarks and/or copyrights, in the United States and other countries, of Lucasfilm Ltd. and/or its affiliates. © & TM Lucasfilm Ltd.

LEGO, the LEGO logo, the Minifigure, DUPLO, BIONICLE, LEGENDS OF CHIMA, DIMENSIONS, the FRIENDS logo, the MINIFIGURES logo, MINDSTORMS, MIXELS, NINJAGO and NEXO KNIGHTS are trademarks of the LEGO Group. ©2019 The LEGO Group.

Apple Unveils the Next Generation of Apple TV 4K, Making the Best Device for Watching Shows and Movies Even Better

Apple Unveils the Next Generation of Apple TV 4K, Making the Best Device for Watching Shows and Movies Even Better